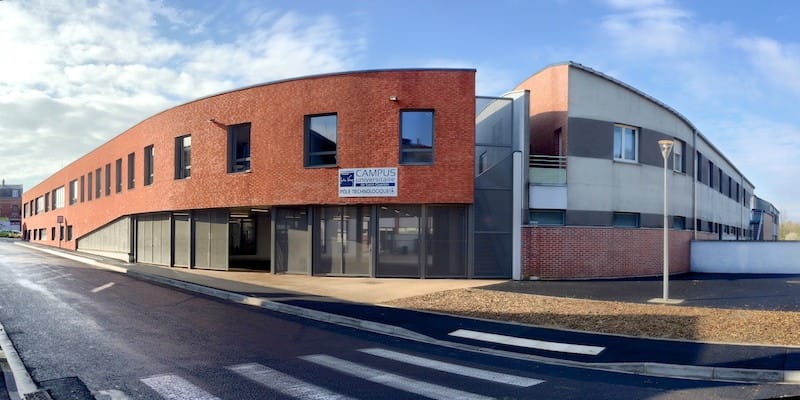 The Geopolymer Institute headquarter is located at Saint-Quentin, in the Aisne province, in the Picardie region, 150 km up north of Paris, near two highways (A26 and A29), a TGV (high speed train) station, and 1h15 drive from Charles-De-Gaulle Airport.

The above picture shows the location where we organize the Geopolymer Camp (at the Campus Universitaire de Saint-Quentin, University of Picardie, 48 rue d’Ostende, 02100 Saint-Quentin). See on the Google Map waypoints

Charles-De-Gaulle Airport:
Taking the TGV (Very Fast Train): From Charles-De-Gaulle Airport, go to Terminal 2E (if you land at Terminal 1, take the free train shuttle CDGVAL), you can take the TGV to the “TGV Haute Picardie” station, and then take a shuttle to Saint-Quentin. You must buy the TGV and the shuttle tickets at the same time. Ask your travel agent or go to the French railway company’s SNCF web site to check schedule and availability. You can buy tickets at the station (around 45 €, train + shuttle). The TGV takes 30 min. to go to the station, and the bus takes 30 min. to Saint-Quentin. Then, you will get a taxi to your hotel.
Taking the regular train: First, take the RER B (Suburb train) from Terminal 2E to “Paris Nord” station (30 min.) (if you land at Terminal 1, take the free train shuttle CDGVAL to Terminal 2E) (see below “Arriving by train”), one way ticket (around 9 €). From “Paris Nord” station, you can take a train to Saint-Quentin (75 minutes). You can purchase the ticket at the train station (around 28 €).
Taking a taxi: a taxi to Saint-Quentin costs 190 to 250 €. There are a lot of official drivers waiting at the exit of the gate, and you can choose the size of your car and negotiate the price.
Renting a car: Many companies are there. Ask your travel agent.

Ask your travel agent or go to the French Railway Company’s SNCF web site or Trainline website to check schedule and availability.

Paris-Orly Airport:
Take the OrlyVal shuttle (an automatic train) then take the suburb train (called RER B) to Paris, Gare du Nord (the train station). The ticket is about 9 €, and it is a 30 minutes drive. Then take the train to Saint-Quentin.

Paris-Beauvais Airport:
There is no direct connection to Saint-Quentin. You must ride to Paris with the Airport Shuttle. The one way ticket is about 17 €. For details (in French, English, Spanish and Italian).
For time table go to Beauvais Airport – Paris Bus. You arrive at Porte Maillot in Paris and take a taxi or Métro to the railway station Gare du Nord (see below).

Bruxelles, Belgium Airport:
This international airport is also a good option while some flights are cheaper when landing at Bruxelles than Paris. However, there is no train from Bruxelles to Saint-Quentin (or you need at least two connections). It is better to rent a car, the distance is 180 km, a 1h50 drive.

From Paris, Gare du Nord: there are regular trains to Saint-Quentin every hour from Paris Nord station. At Paris, if you are coming from the subway, go upstairs to the ground level, and follow the signs “Trains Grandes Lignes – Mainline services”. Choose either a direct train or one with a maximum of one stop by. The trip lasts 1h17, the one way ticket is around 28 €. Otherwise, it will be too long (around 1h45) and you may miss the right station! At Saint-Quentin train station, you can take a local taxi in front of the station, or you can take the bus nr. 3 to the city center (5 min.)
From other european cities: there is a TGV train station nearby, called the “TGV Haute Picardie” station with fast trains from Europe (TGV, Thalys and Eurostar in connection with Lille). Reserve a ticket by your travel agent. You have to buy a bus shuttle ticket to go to Saint-Quentin train station, and then, you will take a taxi.
French Railway Company’s SNCF web site or Trainline website for low fare price.

As there are several cities in France named Saint-Quentin, the server will ask you to choose the right one on a list; you will select the one called in their computer “France-Aisne-Picardie : Saint-Quentin (02100)”. 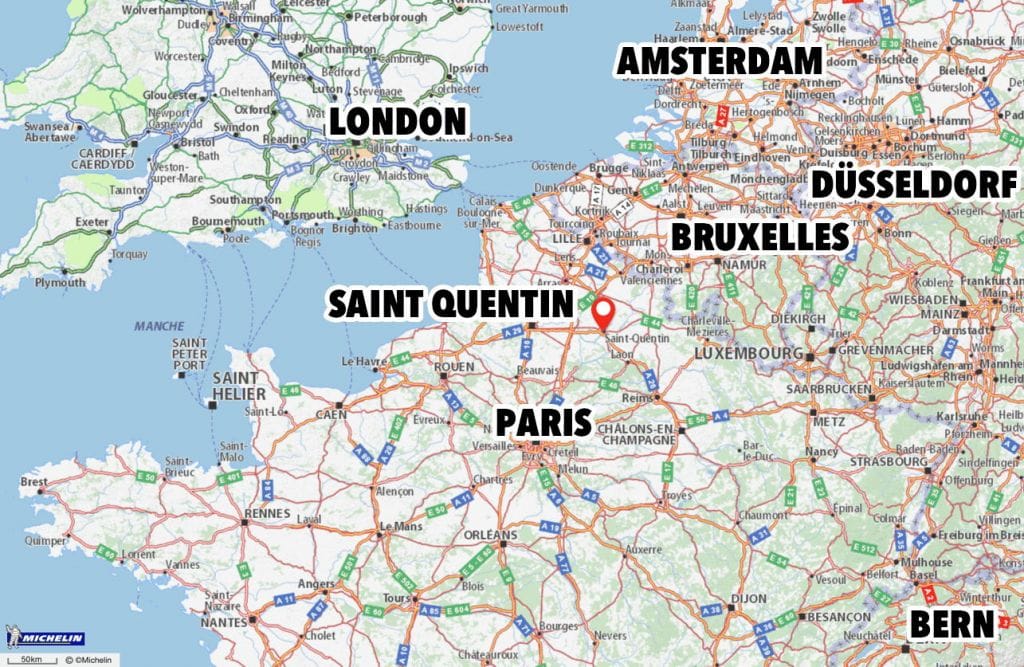 List of selected hotels, services and restaurants to help preparing your stay in Saint-Quentin. Everything you need to know is written there to enjoy your journey.