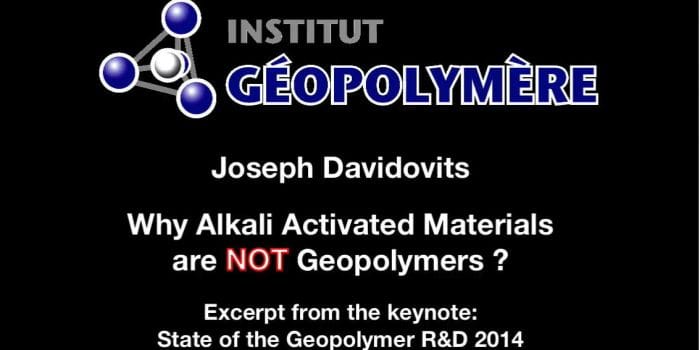 Many scientists and civil engineers are mistaking alkali activation for geopolymers, fueling confusion, using them as synonyms without understanding what they really are.

To sum-up: Alkali-Activated Materials (AAM) are NOT Polymers, so they cannot be called Geo-Polymers. AAMs are hydrates and Geopolymers are polymers. Geopolymers are NOT a subset of AAM because they are not a calcium hydrate alternative (no NASH, no KASH). Geopolymer is not a hydrate, because water does not participate in the structuration of the material. They belong to two very different and separate chemistry systems (a hydrate/precipitate that is a monomer or a dimer versus a true polymer). Those who claim that both terms are synonyms are promoting a misleading scientific belief. Learn why by watching these four videos.

Get an official transcript of the 4 videos, including a DOI for official references and citations, by downloading the technical paper # 25.

In 2016, a paper published by a group of scientists determined that there is no presence of NASH or KASH in geopolymer cement (see part 3 below). In this short excerpt, Prof. Joseph Davidovits explains this result by the true polymer nature of geopolymer chemistry. You will learn what true NASH and KASH are, and in which context they are actually used. AAM and geopolymer cement (wrongly shorten by some as “geopolymers”) are two very different and separate chemistry (a hydrate/precipitate that is a monomer or a dimer versus a true polymer). None is a subset of the other or its derivative which leads to confused interpretations.

Part 3: AAM are not polymers, so they cannot be called “geopolymers”

Prof. Joseph Davidovits emphasizes the fact that Alkali Activated Materials (AAM) are not polymers, so they cannot be called “geopolymers”. He presents what scientists are now writing about this issue. They now agree with proven facts that it is a big scientific mistake to use AAM and geopolymer as synonyms, and people shall stop doing so. Geopolymer cement is not a CSH derivative; therefore, scientists are now stating that applying the CSH terminology from Portland cement is not only inappropriate, but also calling them NASH and KASH is totally wrong. Those who purposefully use and propagate these misleading languages delude the understanding of the true chemical reactions that really occur (never a hydrate or a gel, but a polymer), resulting in confused interpretations.

Prof. J. Davidovits explains the main differences between AAC (Alkali-Activated Cement or Concrete), AAS (Alkali-Activated Slag), AAF (Alkali-Activated Fly Ash) and Slag-based Geopolymer cement, in terms of chemistry, molecular structure, long-term durability. In a second part, on hand of the industrialization of Slag/fly ash-based geopolymer cement/concrete implemented by the company Wagners, Australia, he focuses on the results provided by the carbonation testing data obtained for ordinary Portland cement, AAS and EFC (Slag/fly ash-based geopolymer). The tests were carried out at the Royal Melbourne Institute of Technology RMIT in Australia. Geopolymer behaves like regular Portland cement, whereas AAS gets very bad carbonation results.

Part 2 (2015): Clarifying statement about all the false ideas and assertions

Prof. J. Davidovits makes a clarifying statement about all the false ideas and assertions written by several alkali activated materials scientists (incorrectly using the word “geopolymer” for marketing purpose in place of AAM) and blindly imitated by others. He explains why it is a true polymer with a well-known and understood chemistry (as opposed to those who claim it is a “gel” of unknown character), mentions the historicity and discovery of geopolymer chemistry, the real contributions of Glukhovsky and what he really wrote about geopolymers. He develops the range of actual industrial applications that goes far beyond cement made out of wastes…