In memoriam
It is with sorrow that I learned that my friend Georges Grimal died at the age of 98 years. The majority of our scientific colleagues, engineers and students, know at least one of his works of Art created with geopolymer. It is displayed on this site at the page Potential utilizations in Art and Decoration

I met with Georges Grimal in 1981. Major General of the French Air Force, he had always been interested by new developments related to aeronautic, but at the same time he cultivated his gifts as a painter and sculptor. We had just manufactured prototypes in geopolymer for the French company Marcel Dassault (the bomber Mirage 2000), when George Grimal discovered the properties of our revolutionary material. He immediately thought of employing it for his sculptures and bas-reliefs. He was very gifted for the pastel painting and his outlines out of clay revealed the same subtleties as his paintings. He learned how to make silicone moulds, then objects in geopolymer. Very soon, we created a one meter high statue, called: Europa, followed by splendid woman heads and busts, before focusing on his major work, the Dramatized Sculpture. He took an active part in our Geopolymer Conferences: 1988, 1999 and deeply regretted not to be able to attend GEOPOLYMER 2005. His concept was successfully presented at Geopolymer ‘99, and his contributions are published in the Proceedings of Geopolymer ‘88 and Geopolymer ‘99. I have decided to put in our Library for free download, therefore accessible to all, his Geopolymer ‘99 conference, entitled Dramatized Sculptures with Geopolymers 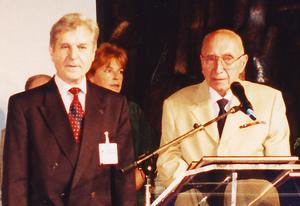 Georges Grimal at the right, with Joseph Davidovits, at the ceremonial presentation of the Conference Geopolymer ‘99, Saint-Quentin, July 1., 1999.