On January 14th, 2007, we celebrate the 11th anniversary of the Geopolymer Institute Website. It is the first time we share this event with you, dear visitors. You are reading the first source of geopolymer science and we thank you for making it a success.

We would like to share with you a piece of the website’s little story. You see, in the picture below, a copy of 4 home pages, illustrating the 4 versions in which the website evolved. And still from the beginning, the website is developed, coded, designed and maintained by Ralph Davidovits.

The first version was officially launched on January 14th, 1996 at the ICCI’96 congress in Tucson, USA, during a presentation of Prof. Joseph Davidovits. It was hosted at our local university (INSSET, part of the university of Picardie, in France) on an Apple PowerMac 6100 and a 64kb internet line. There were around 25 pages, and already 11 papers free to download in the library. During the first year, we get around 10 to 15 visitors per day, but we expected this audience in one month! From this moment on, we really measures the true demand on geopolymers, and the necessity to develop something better for the community.

The second version was released a year after. We asked a friend to do some design works in order to offer a more attractive website. We got a new logo for the Geopolymer Institute and a new layout. In one year, 1500 papers were downloaded from the library. In addition, it was acclaimed as one of the best scientific website in the world by different sources! In 1998, the local university got a 128kb internet line and hosted our website on a Linux server.

The third version was launched in year 2000, with a professional hosting company and a real domain name (geopolymer.org). We used all the technology of that time, and was managed in a more professional way, with 270 pages, 30000 visitors per year, and we translated some part in French. Until then, everything was in English.

The fourth and last version was released on march 2006, and is using the cutting edge internet technology in a dynamic website, and sporting a new logo for the Geopolymer Institute. It took 3 months to develop it. You can subscribe to its RSS feed and even read it on you mobile phone or PDA! Our new website is ready to hold 1000 visitors a day (it happened in early December 2006), bigger downloads of bigger files and also videos, yet 130000 files have been downloaded from the library.
We hope to keep this one for the next 5 years.

Did you notice? This website is really free, no ads, no cookies, no proprietary files, because we care of your privacy, the ease of use, the access to all users (not a majority), even impaired ones, thanks to our respects to open standards and free softwares.

And again, thank you for your support and your enthusiasm in the geopolymer science! 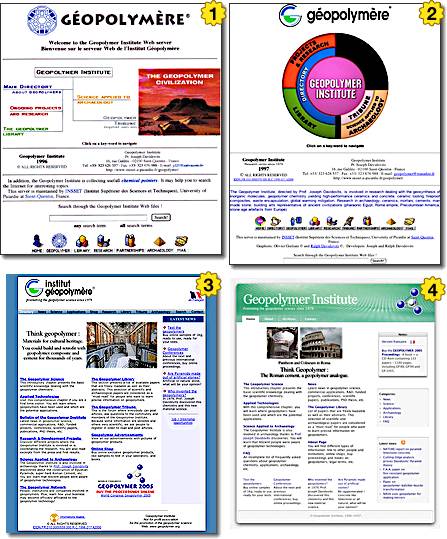