Professor J. Davidovits started working on CO2 emissions mitigation as earlier as 1990, at PennState Materials Research Laboratory, Pennstate University, USA. Unfortunately, American Agencies (DOE and EPA) stated that this was not an important issue and both institutions declined to support research proposals.
In this section we develop:
a) Rock-based Geopolymer cements;
b) Fly ash-based Geopolymer cements

European cement manufacturers are confronted with the EC CO2 eco-tax proposal and are lobbying Brussel’s Administration. They claim that the eco-tax would have a negative effect on the competitiveness of the European cement industry. The planned CO2 eco-tax on energy is likely to induce industries to move abroad. The representative of one of the world leading cement experts argues that ”(…) if Europe is the only one to adopt it [the eco-tax], it will be more profitable to install our factories in Algiers [North Africa], rather than in Marseille [France]. Freight costs would be equivalent to the increase in manufacturing costs (…)”. This statement does not reflect the true scope of the issue, which was addressed by J. Davidovits at the 5th GLOBAL WARMING International Conference (see «Global Warming Impact On the Cement and Aggregates Industries», in World Resource Review Vol. 6, N°2, 263-278, 1994) (see in LIBRARY the paper #5 Global Warming ). The burden would be shifted towards third world countries and international cement production would continue to grow.

Cement, (Portland cement), results from the calcination of limestone (calcium carbonate) at very high temperatures of approximately 1450-1500°C, and silico-aluminous material according to the reaction

Assuming a 5% yearly increase, in year 2015 world cement CO2 emissions could equal the 3,500 millions tonnes presently emitted by European (E.U.) industrial activities (industry + energy + transportation), or 65% of the present total U.S. CO2 emissions . This illustrates the need for new technologies to be adapted to the economy of developing countries.

Unless something drastic and different is done, the world’s atmosphere will go on being destroyed by the production of Portland cement, which is a far worse source of atmospheric pollution than the oil industry or any other known industry. The fact that the dangers to the world’s ecological system from the manufacture of Portland cement is so little known by politicians and public makes the problem all the more urgent: when nothing is known, nothing is done.
This situation clearly cannot continue if the world is going to survive. The conversion of existing cement factories to clean production of geopolymeric cement does not necessitate any re-equipment. The same grinders and the same ovens can be retained for the new process, but the ovens are merely run at half-temperature. For geopolymeric cement production, no temperature higher than 750°C is ever needed. This means that only one third of the fuel requirement is needed for cement production, and of course the fuel emissions are thus reduced by two thirds. This means local benefits for coal-burning regions, with drastic reductions in sulfur dioxide and nitrogen emissions, as well as suppression of particulate emissions. But the main benefits of geopolymeric cements are the reductions in carbon dioxide: the chemical process emits zero carbon dioxide, and the fuel much less, so the end result is a reduction in carbon dioxide emissions for cement manufacture of between 80% and 90%.

There is no other existing and proven technology in the world today which offers such hope for saving the world’s atmosphere.

THE CONCRETE JUNGLE OVERHEATS:
Estimates of carbon dioxide emissions from one of the world’s growth industries
have been grossly underestimated.
“CEMENT kilns contribute more to the world’s output of carbon dioxide than aircraft and could soon be responsible for 10 % of all emissions of the greenhouse gas. New calculations by an industry scientist reveal that cement manufacturers already produce 7 % of global CO2 emissions-almost three times previously published estimates, and that CO2 output is increasing faster from cement works than from any other industrial source.
Cement production creates CO2 in two ways: by the conversion of calcium carbonate to calcium oxide inside the kilns, and by burning large quantities of fossil fuels to heat the kilns to the 1450°C necessary for roasting limestone. Previous estimates for CO2 emissions from cement production have concentrated only on the former source. The UN’s Intergovernmental Panel on Climate Change puts the industry’s total contribution to CO2 emissions at 2.4 %; the Carbon Dioxide Information Analysis Center at the Oak Ridge National Laboratory in Tennessee quotes 2.6 %.
Now Joseph Davidovits of the Geopolymer Institute, a research institution based in Saint-Quentin, Picardie, France, has for the first time looked at both sources. He as calculated that world cement production of 1.4 billion tonnes a year produces 7 % of current CO2 emissions. This puts it behind power generation and vehicle exhausts as a source of the gas, but ahead of aircraft, which have excited huge attention from politicians concerned about curbing global warming.
Dale Kaiser at Oak Ridge confirmed this week that “our calculation only singles out the chemical transformation aspect”. (…) John Lanchbery director of environmental projects at the Verification Technology Information Centre in London, who analyses national CO2 emissions inventories, says: “Cement is well known as the biggest manufacturing source of CO2, but I certainly had no idea the total was as high as is being suggested.”
Globally cement production is rising by 5 % a year, says Davidovits. He predicts that it will be responsible for a tenth of global CO2 emissions by 2000. It is growing fastest in the “tiger” economies of east Asia, where construction of buildings, roads and other infrastructure is booming. In Korea, the industry is already responsible for an estimated 13 % of the country’s CO2 emissions. (…) The silence on cement manufacture as a cause of global warming contrasts with the growing concern over aircraft emissions, which are estimated to contribute a maximum of 5 %. Last month at the Earth Summit in New York, the European Union called for a global tax on aircraft fuel. But proposals for an internal EU tax on energy aimed at reducing CO2 emissions, specifically excluded the cement industry because its energy use is so high that it was thought a tax would damage it. Fred Pearce

The technology developed for Rock-based Geopolymer cements reduces CO2 emission by 80%. Geopolymeric cements are manufactured in a different manner than Portland cement. Geopolymers do not rely on the calcination of calcium carbonate and therefore do not release bounded CO2. They also do not require extreme high temperature kilns, with large expenditure of fuel, nor do geopolymers require such a large capital investment in plants and equipment. The mechanical properties of these novel geopolymeric cements are similar to those of regular Portland cement. Appropriate geological resources are available on all continents for providing suitable raw materials. The issue of long term durability was studied in relation with archaeological analogues, namely ancient Roman cements. A new linguistic study of the Latin author Vitruvius’ famous book «De Architectura» (1st century B.C.) outlines the unique properties of a “carbunculus” cement, which was manufactured by calcining geological materials (see in Archaeo-Analogues and in the paper #E Searching for Carbunculus ). During cement manufacture, this re-created ancient Roman cement reduces CO2 emissions by 55-60%.

Successful accomplishment of the GEOCISTEM exemplifies the theoretical studies of the Background knowledge (see the Research Project Global Warming and in the LIBRARY the paper #5 Global Warming, and also for example #21 Geopolymer cement review 2013) and demonstrates that it is possible to manufacture new cements with low-CO2 emission during their fabrication, to minimize the «Green House» Global-Warming. The Table and Figure show interesting data on energy cost and CO2 emission for Portland cement and for three types of geopolymeric cements developed during the GEOCISTEM project: glass cement and two CARBUNCULUS cements™

Seventeen samples of (co-)combustion European fly ashes were tested on their suitability for geopolymeric cements. Normally, curing of fly ash-based matrices is done at temperatures between 60 and 90°C. In this project, since the idea is to use the geopolymer as a cement, the curing is taking place at ambient temperature, with a modified (Ca,K)-based geopolymeric system. The Final Technical and Scientific Report was presented mid 2008. Detailed information may be found in the Technical paper #22 at GEOASH: fly ash-based geopolymer cements as well as in the updated 3rd edition of Davidovits’ book Geopolymer Chemistry & Applications, Chapter 12.

Two methods were used and compared with. One, called the classical or conventional method, relies on alkali-activation and pure NaOH (8M, 12M), i.e. User-hostile conditions. The second is based on geopolymerization with (Ca,K,Na) geopolymeric systems, i.e. User-friendly conditions. A recent video stresses the major differences between alkali-activation and geopolymerization in Why Alkali-Activated Materials are NOT Geopolymers ?. The geopolymeric method was developed for the implementation of all kind of geological materials, eg. Rock-based geopolymers. The (K,Na,Ca)-poly(sialate-siloxo) process is based on the system fly ash / slag / Ksil / H2O reacting at room temperature. The ashes, 60-80% by weight of the mix, were mixed with the geopolymeric slurry containing alkali-silicate solution (molar SiO2:M2O > 1.40), blast furnace slag and water, and cured at room temperature.

The investigations by Palomo and his team (Fernández-Jiménez and Palomo, 2003), are often taken in the literature as a reference. They claim that the pure NaOH based zeolitic system should be considered as the reference in the determination of the chemical parameters leading to a material with optimal binding properties. According to these standard criteria, any fly ash with a mullite content higher than 5% is not suitable and may not be used. Six fly ashes were selected and submitted to this criteria. The results are shown in the Figure below. Only two fly ashes, CSIC-4 and CSIC-5 have mullite content lower than 5% and might work with alkali-activation. The Figure displays the results of the (Ca,K)-based geopolymeric method. It shows the 28 day compressive strength obtained in relation with the mullite content. All values are higher than 50 MPa, the majority reaching strengths higher than 70 MPa. It is therefore important to notice that practically all class F fly ash types, i.e. those with low free CaO, can be used with this user-friendly system.

It has also been measured that for a given fly ash, the conventional alkali-activation (zeolitic method) provides lower compressive strength than the (Ca,K,Na)-based geopolymeric procedure. The geopolymeric method yields higher strengths as well as lower costs (no thermal activation needed) and safer and easier handling treatment, i.e. user-friendly. 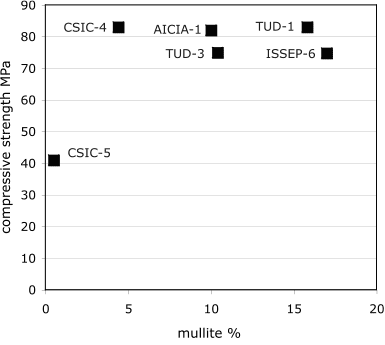