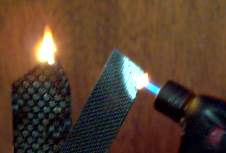 When a plane crash-lands and catches fire, half the people who survive the impact may not get out in time. That is because the plastics in the cabin—the seat cushions, carpeting, walls and luggage bins—are combustible. And when they burn, they give off flammable gases that, in two minutes, can explode into a fireball.
The U.S. Federal Aviation Administration (F.A.A.), wants to give passengers more time to escape. In 1994 the F.A.A. initiated a cooperative research program to develop low-cost, environmentally-friendly, fire resistant matrix materials for aircraft composites and cabin interior applications. The geopolymer composite has been selected by F.A.A. as the best candidate for this program.
Several positive factors favoring geopolymer composite include lower cost and the ability to use existing processing machinery and technology. However, F.A.A. is also requesting that the materials must be used in other industries in order to provide standardized and long-term manufacturing capabilities.

Aircraft cabin materials targeted for geopolymer composite include cargo liners, ceiling, floor panels, partitions and sidewalls, stowage bins, wire insulation, yielding 2500-3000 kg.
There is an increase demand for fire-resistant containers. For example:
Cargo pilots are pushing for fireproof cargo containers. On September 5th., 1996 they had a DC-10 burn up when cargo in a container ignited during flight. The airplane made an emergency landing and no one was injured but the aircraft was totally destroyed. What they would like to do is to fireproof their existing containers and to eventually replace them with new improved containers as the old containers wear out.

A significant technical issue which limits composite use on board Naval ships and submarines is the combustible nature, and hence, the fire, smoke, and toxicity of organic matrix based composite materials. The main conclusion from the extensive fire testing conducted by U.S. NAVY is that unprotected composite systems cannot meet the stringent fire requirements specified for interior spaces. Military vessels must perform their mission even when damaged, and must survive the fire for sufficient period of time to carry out rescue missions. The effects of fires aboard vessels have been demonstrated as a result of collision between ships and ferries during peace time, and by experiences of the British Navy in the Falkland Islands and the American Navy in the Persian Gulf.
NAVY testing of geopolymer composite and GEOPOLY-THERM panels is scheduled, as well as panel testing for ferries and cruisers.

During the Grand Prix season 1994 and 1995, the Benetton Formula 1 team designed a unique thermal shield made out of geopolymer composite. All the parts were around the exhaust area, with special parts replacing titanium. They brilliantly withstood the severe vibration and heat (over 700°C) seen on a Formula One car. It helped the team to become World Champion of car builders and pilots during these two years. Still today, most Formula 1 teams are using geopolymer composite materials.

All American Racers (Dan Gurney’s team) has introduced a more sophisticated design on an American C.A.R.T. car (former Indy-Cart) recognizable with its unique design and distinctive note of the exhaust system going through the molded carbon geopolymer composite body (Eagle 1999).
As stated by Prof. Davidovits at the Geopolymer 2002 Conference, Melbourne (see paper #15 in the Library), the experience gained on racing cars for exhaust parts could be transferred and applied for the mass production of regular automobile parts (corrosion resistant exhaust pipes and the like) as well as heat shields. A geopolymer-composite exhaust pipe system has been developed by Porsche. Source: Porsche PCT Patent, 2004

F.A.A. is aware that the adoption of the new geopolymer composite materials technology by aircraft and cabin manufacturers requires that it be cost effective to install and use, so it is expected that these new aircraft materials will be broadly applicable in transportation and infrastructure where a high degree of intrinsic fire resistance is needed at low to moderate cost and mass production. To this end the F.A.A. had funded the evaluation program carried out at Rutgers, The State University of New Jersey (the GEO-STRUCTURE program) based on the geopolymer technology.

A relatively new and very attractive repair method for concrete, brick and stone structures consists of externally bonding flexible sheets of fiber composites. Another application for continuous fiber composites in infrastructure, already well underway in Japan and USA is the wrapping of concrete columns to reinforce new construction and damaged bridges and buildings in earthquake and hurricane prone areas. In this application, particularly for exposed interior building columns, flammability is a serious concern. Fire safety is a concern often voiced by those who are skeptical about the use of composite materials in the infrastructure and building industry.
In Europe, the market targets on the retrofit of valuable Cultural Heritage buildings where fire safety is the major concern.