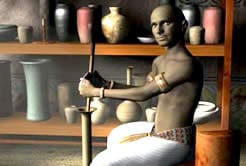 When all the logical conjectures have been set aside, the one that remains, as improbable as it may seem, is likely to be true.

At the Geopolymer Institute we use archaeology as a data bank, to validate our discoveries (see the projects GEOCISTEM and Global Warming and the Geopolymer Proceedings ). Thanks to these historical references, one is able to demonstrate that Geopolymers have the same strength and endurance than natural rock. This shows the originality of our scientific and industrial approach. But this approach has its difficulties, as it requires a critical examination of data that is thousands of years old. Imagine the numbers of natural processes that have had time to act on the ancient materials. There is a risk of misinterpretation, so one must proceed cautiously. Another source of potential errors arises from ancient scriptures, which have been translated through the centuries in diverse ways. See for example the misinterpretation of Latin texts dedicated to ancient Roman mortars and concretes: The mystery of Roman Concrete unveiled , #D The artificial pozzolanic mortars by Vitruvius and #E Searching for Carbunculus .

Interpretations devoid of the new information increase confusion because ingrained preconceptions can be as ferociously guarded by scholars and scientists as a very old bone by a dog. Our research was fiercely opposed by some experts who did not refrain from publicizing the usual brickbats.

We have discovered that the geopolymer chemistry was known in Antiquity. It was called alchemy. We also found that the oldest geopolymer ceramic, black terra cota LTGS, is 25,000 years old. It is the Venus of Dolni Vestonice