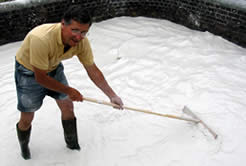 Joseph Davidovits has found revolutionary ways of producing cements with plants saps, which could explain some of the mysteries associated with Pre-Columbian architectures. Preliminary results had been presented at two International Archaeometry Symposia. See in the library the paper #C Making Cements with Plant Extracts disclosing information dating back to 1981 and 1982.

In 1979, at the second International Congress of Egyptologists, Grenoble, France, Prof. Joseph Davidovits presented two conferences. One set forth the hypothesis that the pyramid blocks were cast as concrete, instead of carved. Such a theory was great disruptive to the orthodox theory with its hundreds of thousand of workers taking part in this gigantic endeavor. The second conference stressed that ancient stone vases were made of cast synthetic (man made) hard stone. (see in the Library the Publications List discussing Davidovits’ theory). See also Davidovits’ books

But in the course of his research, and after performing chemical analysis, X-Ray analysis, and Nuclear Magnetic Sprectroscopy (MAS-NMR) on the cement materials, he concluded that ancient Roman cement and the Great Pyramid blocks were the result of a geopolymeric reaction or in other words, a geosynthesis. See in the Library, the paper #A X-Ray of Pyramids Stones dedicated to the X-Ray Analysis and X-Ray Diffraction of Casing Stones from the Pyramids of Egypt, and the Limestone of the Associated Quarries, published in 1984.

In 2004, IXth Egyptology Congress, Grenoble, France, we presented several papers depicting the chemical knowledge of the Egyptians involved in pyramid building. One was dedicated to the manufacture of the famous blue faience tiles, like those adorning the subterranean galleries of the Djoser Step-Pyramid at Saqqarah : See in the Library the paper #F The manufacture of Egyptian Blue Faience Tiles . The second paper dealt with the famous Herodotus text; see the paper #G Herodotus and Pyramid construction (“Construction des pyramides d’après Herodote”).