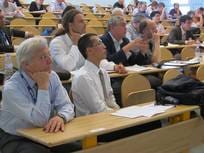 I am presenting a conference as Invited Keynote speaker titled “State of Geopolymer 2012”.

for detail go to: https://www.eventsforce.net/iom/frontend/reg/thome.csp?pageID=135744&eventID=313&eventID=313

TWO OFFICIAL GEOPOLYMER CONFERENCES SCHEDULED EVERY YEAR
At the January 2009 Daytona Beach conference, Professor Joseph Davidovits (Geopolymer Institute, France) and Professor Waltraud Kriven (University of Illinois, USA) agreed to organize two official complementary and different conferences, every year:
– one located in the USA , in January, at Daytona Beach, Florida, Geopolymer Symposium within the Frame of the International Conference on Advanced Ceramics and Composites. This is a regular conference for scientists.
– the second in Europe, in July, in Saint-Quentin, France, the GeopolymerCamp: it is a gathering, a workshop, not a traditional conference.