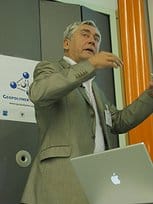 The Geopolymer Camp 2010, was held on July 7th and 8th at the IUT, University of Picardie, in Saint-Quentin, France. You will find below three Keynote conferences, the list of 9 small communications and photos taken during this event.

State of the Geopolymer 2010

It is a review on what happened in 2009 and the first semester of 2010 on geopolymer science and applications. In his keynote, Prof. J. Davidovits developed following topics:
1) Geopolymer science

Tomas HANZLICEK, Prague, Czech Rep, from the Institute of Rock Structure and Mechanics of the Academy of Science, presented his conference “The Geopolymer Composition for Restoration, Construction and Substitution” during the Geopolymer Camp 2010, July 2010 in Saint-Quentin, France.