Geopolymerization forms aluminosilicate frameworks which are similar to those of rock-forming minerals. Yet there are major differences. We simulated a theoretical structure for K-poly(sialate-siloxo) that was consistent with the NMR spectra. It does not show the presence of water in the structure because we only focused on the relationship between Si, Al, Na, K, atoms. Water is present only at temperatures below 150-200°C, and numerous geopolymer industrial and commercial applications do work at temperatures above 200°C, up to 1400°C. Nevertheless, scientists working on low temperature applications, such as cements and waste management tried to pinpoint cations hydration and water molecules. For example Barbosa et al.(2000) stressed the importance of water for cement applications and their model was modified by Rowles (2004). 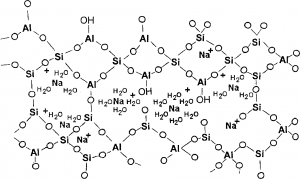 This model is only valid for incompletely reacted geopolymer. It involves free Al-OH groups that will later with time or with temperature evidently polycondense with opposed Si-O-Na, into sialate bonds.

Fully geopolymerized models are very close to the original one proposed by Davidovits (1994). 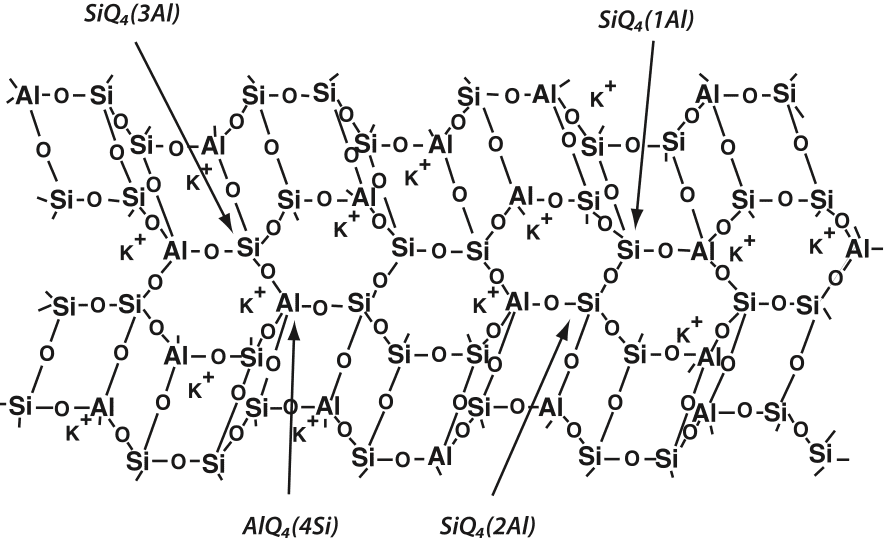 After dehydroxylation (and dehydration), generally above 250°C, geopolymers are becoming more and more crystalline and above 500°C have X-rays diffraction patterns and framework structures identical to their geological analogues.