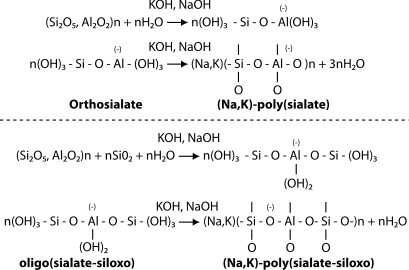 Evidence of oligomer units by NMR

Low molecular elements (monomer, dimer, trimer, tetramer, pentamer) are called oligomers. Oligo-sialate designates the monomer ortho-sialate, the dimer is disialate, etc.; same for oligo(sialate-siloxo) and oligo(sialate-disiloxo). At the beginning of geopolymer research, Joseph Davidovits in 1976 and afterwards for at least 25 years, assumed that the geo-chemical syntheses occurred through hypothetical oligomers (dimer, trimer). Further polycondensation of these hypothetical building units provided the actual structures of the three dimensional macromolecular edifice as displayed in the Figure below. Review papers published at the First Geopolymer Conference in 1988, and at the second, 11 years later, in 1999, could not present scientific details describing the actual reaction mechanism.

It has been the merit of T.W. Swaddle and his team (North M.R. and Swaddle T.W., (2000), Kinetics of Silicate Exchange in Alkaline Aluminosilicate Solutions, Inorg. Chem., 39, 2661-2665) to demonstrate the existence of soluble aluminosilicate species in solution in relatively high concentrations and high pH. One major improvement in their research was that their study was carried out at very low temperatures as low as -9°C. Indeed, it was discovered that the polymerization of oligo-sialates was taking place on a time scale of around 100 milliseconds, i.e. 100 to 1000 times faster than the polymerization of ortho-silicate, oligo-siloxo units. At room temperature or higher, the reaction is so fast that it cannot be detected with conventional NMR equipment. 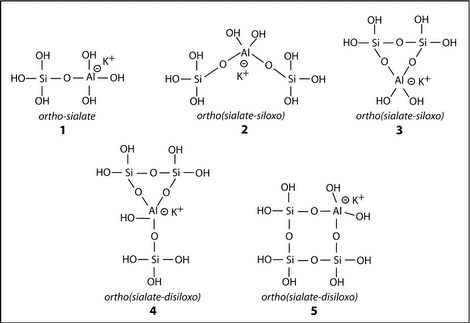 The hypothetical oligomers set forth in geopolymer synthesis are no longer virtual molecules. They actually exist in soluble forms in concentrated solutions at high pH. Swaddle’s study confirms the polymerization mechanisms tentatively reported earlier by Davidovits (1976) with linear oligo-sialate, oligo(sialate-disiloxo) and rings or cycles, as starting geopolymer building units.