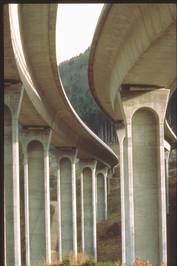 Infrastructure in the United States such as bridges are degrading due to the corrosion of steel-reinforced concrete by salty water and deicing compounds. A relatively new and little known repair method for concrete and brick structures, consists of externally bonding flexible sheets of fiber composites. Another application for continuous fiber composites in infrastructure, already well underway in Japan (with organic matrix) is the wrapping of concrete columns to reinforce new construction and damaged bridges and buildings in earthquake and hurricane prone areas. In this application, particularly for beams, interior building columns, flammability is a serious concern. The flammability of organic polymer matrix, fiber-reinforced composites also limits the use of these materials in offshore oil platforms, military vehicles and public transportation where fire endurance and fire hazard are important design considerations.

This susceptibility to fire currently limits the use of polymer composites in infrastructure precluding any useful advantage in specific strength/ stiffness and corrosion resistance compared to steel or concrete. Carbon-fiber reinforced geopolymer composites did not ignite, burn, or release any smoke even after extended heat flux.The geopolymer matrix carbon fiber composite retains sixty-three percent of its original 245 MPa flexural strength after a simulated large fire.

Not Only Does the Material Not Burn, But It Adheres Better than Epoxy to Concrete.

Experiments by researchers at Rutgers University indicate that a new European composite material dubbed Geopolymer not only does not burn, but adheres better to concrete more effectively and reliably than organic materials, paving the way for use in strengthening both new concrete structures and enhancing old ones.

“Geopolymer provides excellent adhesion both to concrete surface and in the interlaminar planes of fabrics;’ states Prof. Bala Balaguru of Rutgers University. Geopolymer composites were affixed to concrete beams, and “all three beams failed by tearing of fabrics;’ Balaguru reports. “This is significant because … the most common failure pattern reported in the literature is the failure by delamination of fabrics at the interface of concrete and fabrics;’ says the report. “Hence it can be stated that Geopolymer provides as good or better adhesion in comparison with organic polymers”.

At least part of the Rutgers research is funded by the Federal Aviation Administration, which is interested in Geopolymer for aircraft interiors. “Tests conducted on Geopolymer carbon-composites showed that they will not burn at all, no matter how many times ignition might be attempted;’ developers say.

Beam prior to start of testing Geopolymer-Carbon unidirectional fabric (2,3,5 layers) at the bottom surface of the beam