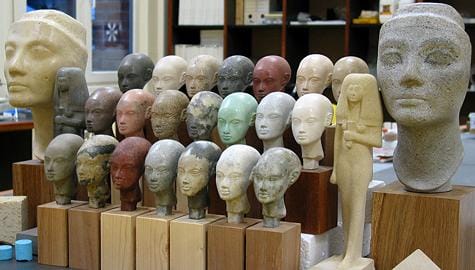 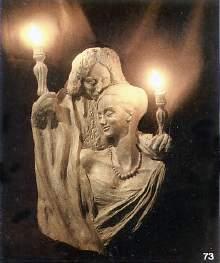 Lighting has tremendous importance in sculpture. I call “dramatized sculpture” the idea of developing the sculpture and suitable lighting together. In these, the artist has incorporated light sources into the work itself, allowing the spectator to feel the key-points and sense the finesse in the half-shadow light that the sculptor tried to convey.
To convey this feeling faithfully, a material both noble and reliable was needed. Thanks to geopolymers that I am using with success since 1982, we are able to reproduce exactly some natural rock material. Hardening of the geopolymer stone mixture occurs in a silicone mold. This process, while retaining the spontaneity of the original clay, also enables to reproduce the desired subtleties in a faithful way. The built-in lights make the subtleties moving, convincing some times to fascination.

Applications in ART and DECORATION 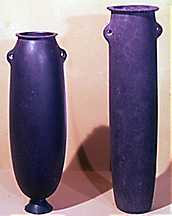 Chapter 1 of Davidovits’ book The Pyramids: an Enigma Solved reads as follows (more details on J. Davidovits’s books in the Archaeology Books page ): “Egypt’s legendary reputation as master of the stone arts spans almost the entire history of civilization. At a time before hieroglyphs or numbers were written or copper was smelted, prehistoric settlers in the Nile valley either inherited or began a remarkable legacy that has survived for at least 6,000 years. During this era, hard stone vessels made of slate, metamorphic schist, diorite, and basalt first appeared. All but indestructible, these items are among the most unusual and enigmatic of the ancient world. In a later era, 30,000 such vessels were placed in an underground chamber of the first pyramid, the Third Dynasty Step Pyramid at Saqqarah. “On examining them attentively, I only became more perplexed,” wrote the renowned German scholar, Kurt Lange, after encountering these stone vessels. “How were they made, the dishes, plates, bowls, and other objects in diorite, which are among the most beautiful of all the fine stone objects? I have no idea… But how could such a hard stone be worked? The Egyptian of that time had at his disposal only stone, copper, and abrasive sand… It is more difficult to imagine the fabrication of hard stone vases with long narrow necks and rounded bellies.” Admittedly, the vessels present a problem that Lange’s “imagination could not handle.”
Metamorphic schist is harder than iron. The diorite used, a granitic rock, is among the hardest known. Modern sculptors do not attempt to carve these varieties of stone. Yet, these vessels were made before the introduction into Egypt of metals strong enough to cut hard stone. Numerous vessels have long, narrow necks and wide, rounded bellies. Their interiors and exteriors correspond perfectly. The tool has not been imagined that could have been inserted into their long necks to shape the perfect, rounded bellies. Smooth and glossy, these vessels bear no trace of tool marks. How were they made?

Since 1979, Prof. Davidovits claims that these hard stone vases were made of synthetic (man-made) stone. More details in the recently updated book Geopolymer Chemistry & Applications Chapter 20. You may also go to the Geopolymer Library and download several papers. The GEOPOLYSTONE technology is the modern equivalent to the 5000 year old Egyptian technique. 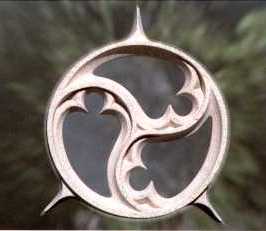 The GEOPOLYSTONE technology is based on the use of modern geopolymer binders and cements. Like the Ying and the Yang, the GEOPOLYSTONE technology connects together two often opposed way of life: high-tech and arts. The properties of geopolymeric binders and cements have been evaluated by several renown international institutions, their quality proven by numerous tests conducted according to the most severe ASTM and DIN Codes.

The rosette is the modern replica of the famous ancient Triskel Celtic Stone featured in the oldest European Christian Churches (between the 9th and the 11th Century AD).

In the 19th Century, the famous painting technique called “Impressionism” was directly derived from the fact that new oil paints were easy to be used outdoors. It could be the same with GEOPOLYSTONE® sculptures that can be produced in thousands exemplars.
Art crafts are very sensitive to fashion. Nevertheless, business results may be substancial because GEOPOLYSTONE® allows to reproducing art works with very subtle details that are often important. 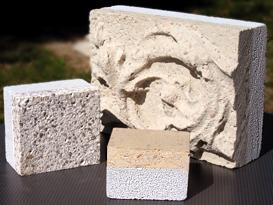 The company CORDI-Géopolymère has finalized an amazing use of the geopolystone technology. Indeed, it has developed an industrial application that moulds this reconstituted natural stone directly on an aerated concrete (AAC/ALC Ytong or Hebel type). The geopolystone perfectly sticks onto it without the need of any glue. This application is dedicated to external and internal walls, and decoration. Any kind of stones, colours and surface treatments can be used (rough surface, dull, shiny, polished, etc.). We can make different shapes, ideal for facades, pediment, and outlines of cornices. The advantage of this process is that no additional protection with any external coating or front face (bricks, tiles etc.) is needed. It is manufactured directly in the plant, ready for use on the building site. Thus, time saving is important, and new opportunities for decorations and new textures will excite architects.
This application can only be applied by an industrial process, and is designed only for aerated concrete manufacturers. Unfortunately, masons cannot produce it manually.

In addition the GEOPOLYSTONE® technology may be associated with fiber reinforced composites for fireproof DECORATION .