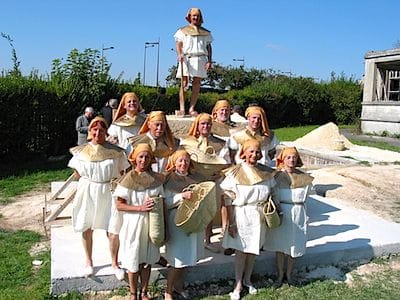 Prof. Joseph DAVIDOVITS presents, in this 1h20 conference, his famous theory on how the Egyptians pyramids were built with re-agglomerated limestone. This conference was recorded in 2008 representing the knowledge of that time.

Since then, recent scientific studies using very powerful and modern equipment found the ultimate evidence that the pyramids stones are synthetic.

Believing in the artificial stone theory, or countering it, is simply no longer relevant. It has become a truth, a fact.

1 hour 20 min, a 204 MB, 3626 downloads. Click on the CC icon to display subtitles in english and français. Click on the icon on the right to watch it full screen. Available on Youtube !

How to built a pyramid?

Here is a small video documentary that shows how a crew of only few people is able to rapidly and easily produce several tons of pyramid stone blocks! If you want to learn more about the technology employed, please read the topic developed in this web site. This theory is also related in Davidovits’ recent book in English (June 2008) Why the Pharaohs built the Pyramids with fake stones.

Here is a small video explaining the theory for the general audience and 3D animations demonstrating how the re-agglomerated stone theory is very easy to implement.

How to analyze pyramid stones

Joseph Davidovits explains how to analyze the pyramid limestones and why geologists see nothing. He demonstrates that a thin section is not the right method to detect artificial stone.
Excerpt from his video conference “Building the Pyramids of Egypt with Fake Stones”.